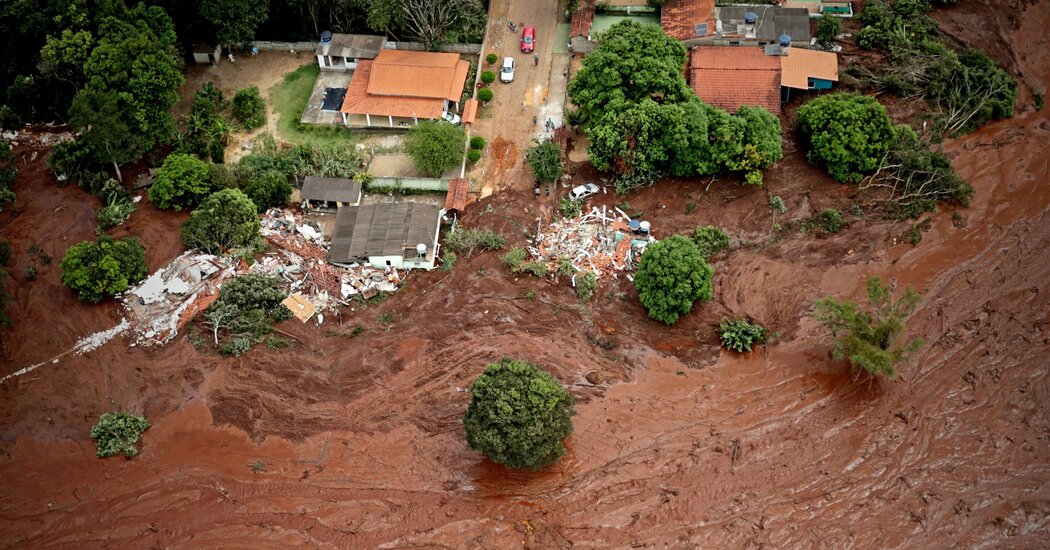 RIO DE JANEIRO — The Brazilian mining giant Vale signed an agreement on Thursday to pay $7 billion in compensation to the state of Minas Gerais, two years after the collapse of one of its dams killed 270 people, also causing vast environmental damage. Eleven people are still missing.

While the amount to be paid was less than what the state government initially demanded, state officials still called it the biggest ever settlement in Brazilian history.

The dam burst destroyed almost 300 acres of native forest and polluted 200 miles of the local Paraopeba River, rendering it useless as a water supply for the state. Traces of the toxic sludge that came out of the dam were found in the São Francisco River, which supplies water to five different states.

The dam, built to hold waste from a nearby iron ore mine, collapsed on Jan. 25, 2019, in the city of Brumadinho, burying homes, hotels, rivers and the company’s facilities under a wave of mud. In only a few days, it became clear that the company had been warned that the structure was unsafe multiple times, internal documents revealed.

A report issued by Tüv Süd, a German company hired by Vale to audit the dam in 2018, before the collapse, vouched for the dam’s safety, even though it found blocked drainage pipes and cracks. Separately, interviews with employees and family members of victims showed the company had been warned by its own staff that the dam was leaking.

In 2020, prosecutors investigating the case found evidence that safety reports had been fabricated for at least 10 of Vale’s dams and later charged 16 officials of Vale and the German company, including Fabio Schvartsman, who was Vale’s chief executive at the time, with homicide.

A report by an independent commission hired by Vale attested that the company knew about the safety risks at the Brumadinho dam since 2003, and had multiple alerts about it through the years — especially in 2015 after a similar dam partly owned by Vale burst, leaving 19 dead.

The disaster destroyed not only swathes of the communities surrounding the dam, but also the jobs, on which Brumadinho’s 40,000 residents depended. Since the disaster, many residents of Brumadinho have been living off cash transfers from Vale as compensation for the tragedy.

The deal includes the continuation of the cash transfer program for another four years, restoring the environment in protected areas that were damaged, as well as projects to be defined by impacted communities.

Luiz Eduardo Osório, the director of institutional relations and sustainability at Vale, celebrated the deal at a ceremony Thursday. “This is the result of months of open dialogue between Vale representatives and members of the government,” he said, pointing out that the company had “heard the wishes of Minas Gerais people.”

Still, many in Brumadinho were dissatisfied with the results of the negotiation, saying they felt excluded from the process. Roughly 150 people protested at the doors of the state court where the deal was signed Thursday, saying it excluded the tragedy’s victims. “Vale and the state do an unfair deal,” one sign read.

Jarbas Soares Júnior, the state’s chief prosecutor, stressed that the deal does not impact other proceedings filed against Vale and its executives, which include corruption and homicide charges. Last year, a state judge agreed to hear a case that charged 16 people.

Mr. Soares Júnior said the deal was the best they could reach, to avoid a lengthy suit in Brazil’s famously slow court system.

“This deal demonstrates that preventive measures done with care are a better option for companies,” he said.

Family members of victims said they were not comforted by the settlement announcement.

Flávia Coelho, 34, said the day was one of mourning, not celebration. It has been two years since she buried her father, Olavo, who died at the dam days after he had warned his superiors that a disaster was imminent.

“He gave 40 years of honest work to a criminal company,” she said in an audio message. “Let them not forget our deal, which isn’t about billions, but justice and honor to the workers who lost their lives.”