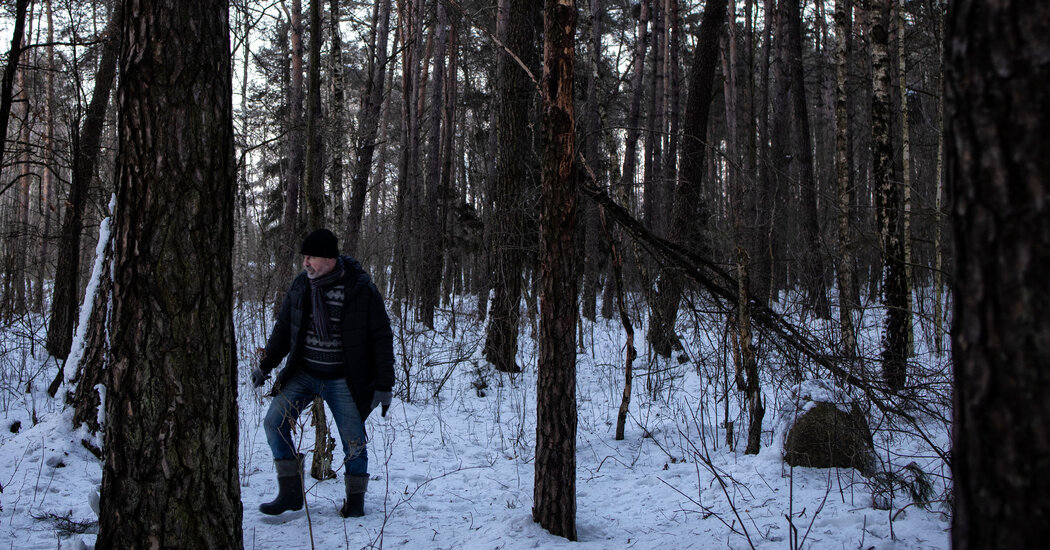 MALINOWO, Poland — From a forest on the edge of this tiny village in eastern Poland, a distant and mostly forgotten local horror is reverberating widely. It has cast a pall over the 30 villagers who live nearby, reached into a courtroom in Warsaw, and is now radiating distress around the world over the rewriting of Holocaust history.

The case has its roots in the Nazi occupation of Poland during World War II, when terrified Jews took shelter in the forest and, according to a survivor cited in a recent Polish study of the Holocaust, were murdered there after the wartime mayor of Malinowo, a Pole, told the Nazis of their hiding place.

That horror, however, has now resurfaced, revived by a libel suit against two scholars who edited the study and who stand accused of besmirching the honor of the long-dead mayor and the Polish nation. A verdict in the case, which was brought by the elderly niece of the mayor with support from bodies funded in part by Poland’s government, is expected Tuesday.

The targets of the libel action are Jan Grabowski, a Polish-Canadian history professor at the University of Ottawa, and Barbara Engelking, a historian with the Polish Center for Holocaust Research. Together they edited “Night Without End,” a 1,700-page 2018 study on the role played by individual Poles in aiding Nazi murder.

“In a normal world this case would have been dismissed long ago,” Professor Grabowski said in an interview. “But Poland can no longer be considered a normal democracy,” he added, accusing the governing Law and Justice Party of starting a “reconquest of history” by focusing on Poland’s own suffering during the war and downplaying its complicity in Nazi crimes against Jews.

The Polish government denies any involvement in the libel case. But it helped make it possible by amending the law in 2020 to waive court costs for all cases connected with “the struggle of the Polish Nation against Nazism and Communism.”

In a sign that the libel suit is not an isolated incident, the police in eastern Poland recently summoned the editor of an online site about Jewish life to ask why she had “insulted the Polish nation” by writing that “Polish participation in the Shoah is a historical fact.”

Before it was invaded in 1939 by Nazi Germany and the Soviet Union, Poland had Europe’s largest Jewish population. As the war expanded and Hitler turned on his erstwhile Soviet ally, conquered Polish lands became the focus of the Nazis’ Final Solution, with around three million Jews — half the total number killed across Europe — murdered in Poland, mostly in death camps like Auschwitz and Treblinka.

But Poland never installed a collaborationist government and is proud of its record of fierce resistance to the Nazis.

This pride, however, has taken on an aggressive, intolerant edge since the Law and Justice Party took power in 2015. It has sought to criminalize any questioning of Polish wartime heroism and poured money into research groups and museum projects that present Poland as Europe’s perpetual and entirely blameless victim, a “Christ of Nations” repeatedly crucified by foreign powers.

Walentyna Golaszewska, a 64-year-old resident of Malinowo, said she grew up hearing stories about how her grandparents had taken food to Jews hiding in the forest. She was shocked to learn that the then-mayor, Edward Malinowski, has now been accused of aiding their murder.

“I thought this whole thing would have gone away with my grandfather’s generation. It all happened over 70 years ago and everyone is now dead. None of us can really know the truth,” she said.

She recently ordered a copy of the study coedited by Professor Grabowski because she wanted to learn more about events obscured for so many years by family legend and village gossip.

“It is very hard to explain why one person helps and another person kills,” she said.

Also hard to explain, she added, is why the wartime mayor’s niece, Filomena Leszczynska, had decided to sue Professor Grabowski and Ms. Engelking for libel and damages of around $27,000.

The niece, who is nearly blind and lives on the edge of the village next to her family’s farm, declined to be interviewed. A young relative said she was too sick to talk.

Professor Grabowski and his supporters believe the case originated with nationalist groups close to the government, like the Polish League Against Defamation, which receives funding from the state.

In a telephone interview, Maciej Swirski, the head of the League Against Defamation, denied acting on behalf of the state or the Law and Justice Party. But he acknowledged that he had helped initiate the libel case. He said he had traveled to Malinowo and told Ms. Leszczynska that he had found errors in the book, proving that her uncle was maligned.

Mr. Swirski said his organization had raised money from private donors to pay Ms. Leszczynska’s lawyers and finance her suit.

The libel complaint alleges that the scholars maliciously smeared the wartime mayor as a murderer, when he had “hid Jews and did this absolutely selflessly.” His niece, the complaint says, was “very hurt” and wanted to keep “the memory of her heroic uncle alive.”

Critics of the action see it as a fight to silence independent historical scholarship. Yad Vashem, Israel’s Holocaust memorial and research center, denounced it as “a serious attack on free and open research,” saying it was “unacceptable” to set limits on academic study “though judicial or political pressure.”

Professor Grabowski acknowledged that the study erred by conflating the histories of two former Malinowo mayors who shared the same name, Edward Malinowski. But, he said, this error put Ms. Leszczynska’s uncle in a better light because it ascribed to him acts of kindness toward Jews by his younger namesake.

In 2012, shortly before his death, the younger Edward Malinowski was invited by Jewish groups to attend a ceremony in the Malinowo forest unveiling a stone memorial decorated with a Star of David.

“The war ended 75 years ago, but it still lives on in our bones. It will last forever,” Mr. Malinowski’s son, Zygmunt, recalled on Saturday during a visit to the memorial.

Poland, he said, should recognize that it was not only Nazis who killed Jews. But in eastern Poland, “Poles suffered no less than the Jews,” he said.

The libel case has received extensive favorable coverage from media outlets controlled by the Law and Justice party and the book at the center of the case has been denounced by the Institute of National Remembrance, a state body that has spearheaded efforts to keep history on a narrow, patriotic path. The institute has prosecutorial powers to enforce what since 2018 has been an official mission that includes “protecting the reputation of the Republic of Poland and the Polish Nation.”

“No scholar with any credentials would say Poland was evil, that Poland was completely indifferent to the fate of Jews,” Mr. Silberklang said in a telephone interview. “It was a clearly a very complex situation.”

Of 27,712 people classified by Yad Vashem as Righteous Among the Nations — non-Jews who took great risks to save Jews during the Holocaust — more than 7,000 are Polish, far more than from any other country.

Polish heroism, however, coexisted with sometimes monstrous acts of violence, a fact that the Law and Justice Party and nationalist outfits have struggled to obscure. In one episode in July 1941, villagers in Jedwabne, northeast of Warsaw, locked more than 300 Jews, neighbors with whom they had previously lived peacefully, in a barn and set it on fire, killing all of them.

The government caused international outrage in 2018 when it introduced legislation that would have made it a criminal offense to accuse the Polish nation of complicity in the Holocaust. The law was amended to replace criminal penalties with less severe civil sanctions.

The libel case against Professor Grabowski and Ms. Engelking, however, has stirred worries that instead of backing away from trying to impose a wart-free, patriotic version of history the government and its allies are now going on the offensive.

“There is a coordinated campaign underway to change history in a way that is comfortable to the government,” said Mr. Silberklang, the Yad Vashem historian.

The current mayor of Malinowo, Grzegorz Zaremba, a dairy farmer, said he first learned of the furor over the killings last month.

“Suddenly, everyone was talking about our little village,” Mr. Zaremba said, “But nobody really knows the truth about what happened here. Those who do are all dead.”