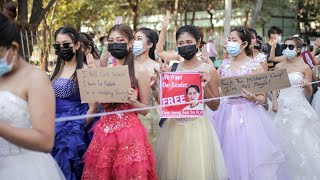 Western nations have repeatedly denounced the coup, with the United States leading calls for the generals to relinquish power.

In the most significant concrete action to pressure the junta, Mr Biden announced Wednesday that his administration was cutting off the generals’ access to $1 billion in funds in the United States.

“I again call on the Burmese military to immediately release democratic political leaders and activists,” Biden said, as he flagged further sanctions.

“The military must relinquish power.”

“This seems like a well calibrated set of measures… Also a strong signal that President Biden himself announced them,” Myanmar-based political analyst Richard Horsey tweeted, describing the sanctions as a “clear message” to the military.

There were more reports of arrests on Thursday, including the deputy speaker of the parliament’s lower house and a key aid to Suu Kyi, taking the number of coup-linked detentions to more than 200, according to monitor Assistance Association for Political Prisoners.

It quickly moved to stack courts and political offices with loyalists as it ended a decade of civilian rule.