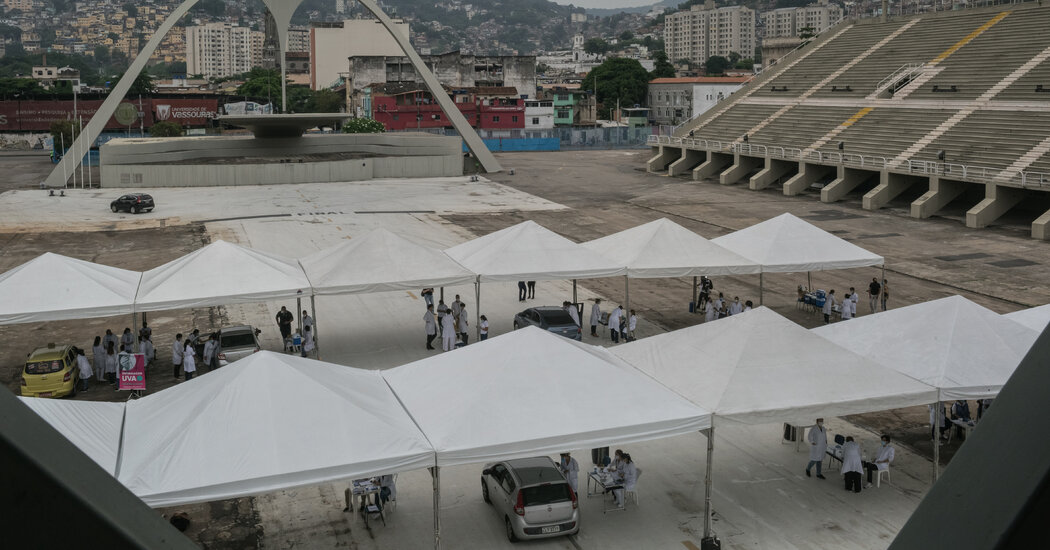 But one recent morning, the only trace of samba at the venue, the Sambódromo parade grounds, was a few melancholic verses that Hildemar Diniz, a composer and Carnival aficionado known as Monarco, belted out through his mask after he went there to get vaccinated against Covid-19.

“There is great sadness,” said Mr. Diniz, 87, who was impeccably dressed in white. “But it is essential to save lives. People love to party, to dance, but this year we don’t get to.”

People partied hard during years of war, hyperinflation, repressive military rule, runaway violence and even the 1919 Spanish Flu, when the Carnival was considered among the most decadent on record. Official calls to postpone it in 1892 and 1912 — because of a trash-collection crisis and to mourn the death of a statesman — were largely ignored as people flocked to the streets in costumes.

This year, though, the only thing keeping the spirit of Carnival faintly alive: online events produced by groups that traditionally put on extravagant street performances.

“It’s very sad for Rio not to have Carnival,” Daniel Soranz, the city’s health secretary, said this past Saturday morning, standing in the middle of the Sambódromo as elderly residents got vaccinated under white tents. “This is a place to party, to celebrate life.”

Gabriel Lins, a medical student who was among the dozens of vaccinators, reminisced about the two times he came to the Sambódromo, a parade route flanked by bleachers seating 56,000 people, where samba schools put on elaborate, obsessively choreographed shows. He’s also missing the street parties known as blocos, which snake through virtually every district of the city as thousands throw back drinks, kiss strangers and dance in minimalist costumes.

“This is very very strange for those of us who are used to Carnival,” Mr. Lins said on a muggy, rainy morning. “Carnival brings us joy.”

Around him, after almost a year of fear and suffering, Brazilians were at last being armed against the virus. “But today should also be seen as a day of joy,” he said, as people lined up for their shots.

Marcilia Lopes, 85, a fixture of the Portela samba school who hasn’t missed a Carnival for decades, looked more relieved than joyous after she got her first dose of the Chinese-made CoronaVac vaccine.

She has been so scared of catching the virus for the past year that she refused to leave home for anything. On her birthday, she asked her children not to even bother buying a cake — she was in no mood to celebrate. So Ms. Lopes is missing her beloved Carnival this year, but stoically.

“I’m at peace,” she said. “Many people are suffering.”

As a second wave took hold in recent months, local officials across the country canceled the traditional Carnival celebrations, which normally bring in hundreds of million of dollars in tourism revenue and create tens of thousands of temporary jobs.

Rio de Janeiro officials had hoped they could hold Carnival late this year if cases dropped as enough people began to get vaccinated. But that prospect now looks unlikely given Brazil’s limited supply of vaccines, which forced Rio de Janeiro to halt its vaccine campaign this week because it ran out of doses. New variants of the virus that scientists believe may be accelerating contagion are also deepening the uncertainty, as are questions about the effectiveness of the vaccine.

Marcus Faustini, Rio de Janeiro’s secretary of culture, said that as painful as it was to slog through carnival season without revelry, there was no responsible way to adapt the megaparty for this era of social distancing.

“It would make no sense to hold this party at this time and run the risk of driving a surge of cases,” he said. “The most vital thing right now is to protect lives.”

Cariocas, as Rio de Janeiro residents are called, are not known as rule followers. So the city has put together a task force of some 1,000 police officers tasked with roaming the streets and social media looking for Carnival speakeasies.

While the authorities have shut down some underground gatherings and boat parties, the vast majority of traditional Carnival party organizers appear to be complying with the rules. Perhaps surprisingly, there are few official restrictions for bars and beaches, which have been thronged in recent days and where a city mask mandate is seldom enforced.

City officials expect that hotels, which often sell out during Carnival, will have a 40 percent occupancy rate this week. Tourist destinations where people are often packed in, including the Christ the Redeemer statue and Sugarloaf Mountain, are open and receiving hundreds of visitors per day.

Leo Szel, a singer and visual artist, is among those mourning a year without carnival, which is especially painful following months of grief, isolation and grim news.

“For me, Carnival means a timeout, like an autonomous temporary zone that is almost anarchy, where there is freedom,” he said.

While several popular street party groups have streamed recorded events in recent days, Mr. Szel said he and fellow leaders of the bloco Sereias da Guanabara, which is popular among L.G.B.T.Q. revelers, had not raised money to produce an event online.

They’re among thousands who are suffering financially from the loss of the street parties, which take months of planning and employ an army of choreographers, set designers, costume makers, performers and vendors.

“It’s bleak,” said Valmir Moratelli, a documentary filmmaker who has chronicled the past few Carnivals, which have been dogged by an economic downturn, waves of street crime and the city’s recently departed evangelical mayor, who cut funding for the samba parade and did little to hide his disdain for the season of hedonism.

Mr. Diniz, the composer, said all the pent-up frustration and grief Brazilians are feeling will fuel a Carnival for the ages when it’s safe to party again.

“It is so eagerly awaited,” he said. “People are thirsty for joy.”