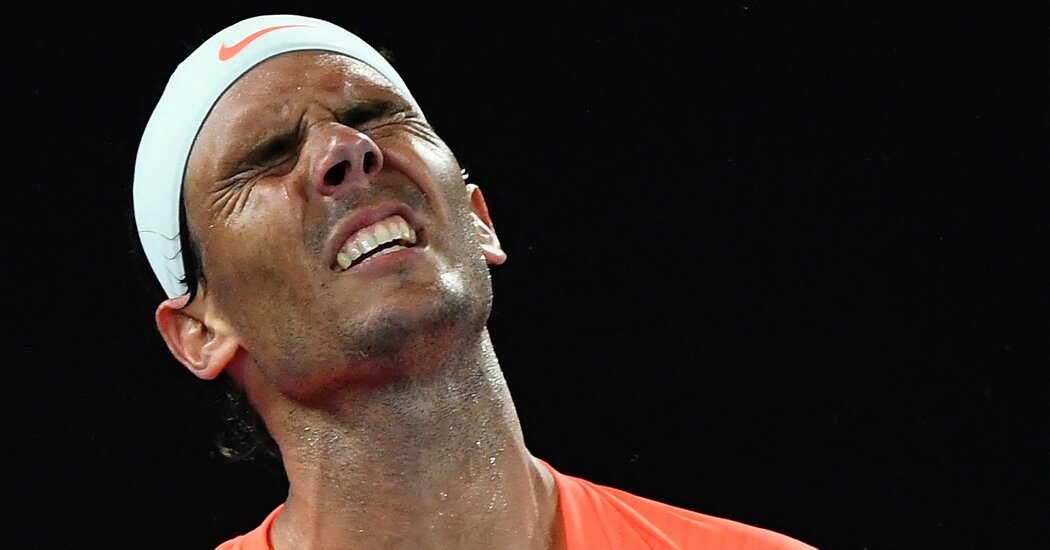 MELBOURNE, Australia — Rafael Nadal’s bid for a record 21st men’s Grand Slam singles title ended Wednesday night when he lost to Stefanos Tsitsipas of Greece in the quarterfinals at the Australian Open.

Nadal played a near flawless first three sets, not allowing a break of his serve or even a break point, and he appeared in full control of the match. But in the third set tiebreaker he missed two overheads and sent a backhand wide to give Tsitsipas the tiebreaker and a lifeline.

Then what had been a rout turned into a street fight. Playing on fresh legs after winning his fourth-round match in a walkover, Tsitsipas became increasingly stingy on his serve, refusing to give Nadal a chance to seize an advantage and forcing him into sloppy errors as he grew more fatigued.

Tsitsipas, who at 22 years old is 12 years younger than Nadal, seemed to gain energy and a bounce in his step as the warm evening wore on, getting to balls that had been out of his reach earlier and forcing Nadal to hit extra shots and battle to hold his serve in nearly every game.

In the fifth set, Nadal and Tsitsipas traded service games, with Tsitsipas’s serve becoming increasingly untouchable — he served four consecutive aces to knot the set at 3-3 — and Nadal fighting for nearly every point to stay level. Serving at 5-5 in the fifth set, Nadal made two errors to lose the first two points of the game, then missed wide on the forehand to give Tsitsipas his chance to serve out the match.

With only his friends and support team in the stands because of a snap lockdown amid a small coronavirus outbreak, Tsitsipas dropped his racket when it was over, made a cross on his chest and look toward the sky.

The final game was a microcosm of the match. An early lead for Nadal, followed by Tsitsipas storming back, Nadal fighting off two match points to give himself a chance to survive, before netting a forehand volley and watching Tsitsipas blast a backhand down the line to clinch the match.

“I have no words to describe it,” said Tsitsipas, who also won the ATP Tour finals in 2019.

For Nadal, the loss prevented him from pushing ahead of Roger Federer of Switzerland in their duel to collect the most Grand Slam singles championships.

Federer has been sidelined with a knee injury since last year’s Australian Open and has missed all three Grand Slams since tennis returned in August just before the United States Open. He plans to return to competition in the coming weeks.

Nadal skipped the United States Open as well, but he returned for the French Open weeks later and won it to tie Federer with 20 singles titles.

Nadal was not the favorite in this tournament, which he has won just once, in 2009, though he has come close on other occasions, most notably in 2012, when he lost in five sets to Novak Djokovic in a match that last a record five hours, 53 minutes. The tournament is contested on fast hardcourts, which challenge Nadal far more than the slow red clay in Paris or the softer grass at Wimbledon, which inflicts less wear and tear on his body.

Nadal’s loss is likely to make Djokovic’s bid for a record ninth Australian Open singles title far easier. Djokovic plays Aslan Karatsev, ranked 114th in the world, in the semifinals on Thursday. If he wins that, he will face either Tsitsipas or Daniil Medvedev of Russia in the finals.

Nadal strained muscles in his lower back while training in Adelaide before this tournament. The injury prevented him from following his usual practice routine for nearly three weeks, but after his third round win here over Cameron Norrie of Britain he said the problem had largely been resolved. He dominated Fabio Fognini of Italy in the fourth round and had not lost a set at the tournament before facing Tsitsipas.

Tsitsipas had just one win in seven tries against Nadal coming into Wednesday night’s match. At first he tried to prevail by ending points quickly and avoiding the long rallies that Nadal uses to wear down his opponents. But Nadal kept hitting shots within inches of the lines that Tsitsipas struggled to get his racket on.

With Nadal tiring though, Tsitsipas stayed back and pursued something like tennis rope-a-dope, keeping the ball in play until Nadal blasted an error or gave Tsitsipas an opportunity for a winner. He finally broke Nadal in the ninth game of the fourth set, and won it in the next one as Nadal hit into the net to turn the match into a one-set battle.

It was only the third time Nadal had lost after winning the first two sets.

Tsitsipas now faces Daniil Medvedev of Russia in the semifinal.

“It’s an unbelievable feeling to be able to fight at such a high level,” Tsitsipas said. “I can’t wait to play some good tennis.”