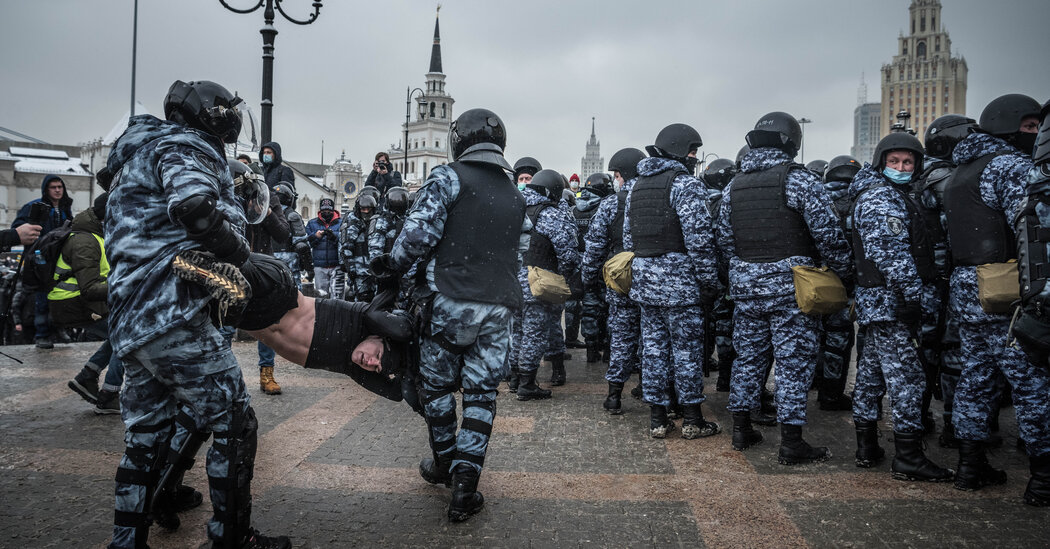 Thousands detained during a second weekend of Navalny protests

The Kremlin mounted Russia’s most fearsome nationwide police operation in recent memory on Sunday, seeking to overwhelm a protest movement supporting the jailed opposition leader Aleksei Navalny that swept across the country for the second weekend in a row.

More than 5,000 people, including Mr. Navalny’s wife, Yulia Navalnaya, were detained, but many have been released. Here’s the latest.

Quotable: “The bolts are tightening,” said Nikolai Babikov, 31, a computer systems analyst surveying the police operation in Moscow. “Freedom is being eliminated, and bit by bit we are becoming the Soviet Union again.”

A state of emergency in Myanmar

Myanmar’s civilian leader, Daw Aung San Suu Kyi, and her top lieutenants were detained in raids early this morning, as the military reasserted its grip on the country with a coup against a government that had been in power for only five years.

Officials from the National League for Democracy, Ms. Aung San Suu Kyi’s party, confirmed the detentions. Hours later, with politicians and activists alike racing to find out who had been detained, a military television network announced a one-year state of emergency with power transferred to the army chief, Senior Gen. Min Aung Hlaing.

Analysis: “The doors just opened to a different, almost certainly darker future,” said Thant Myint-U, a historian of Myanmar. “Myanmar is a country already at war with itself, awash in weapons, with millions barely able to feed themselves, deeply divided along religious and ethnic lines.”

Background: In recent years, Ms. Aung San Suu Kyi, 75, once celebrated as an international champion of human rights, has defended the security forces against accusations that they waged a genocidal campaign against the Rohingya, a Muslim ethnic minority group. But with her party winning the November election in a landslide, the generals began visibly losing patience with the facade of civilian rule that they had designed.

The European Union has abruptly reversed its attempt to use emergency measures under the Brexit deal to block the shipment of Covid-19 vaccines from the bloc across the Irish border and into the United Kingdom.

The bloc’s initial announcement, on Friday, was criticized by both the Republic of Ireland, a member of the European Union, and Northern Ireland, a part of the United Kingdom. Arlene Foster, Northern Ireland’s first minister, called the move “an incredible act of hostility.”

Ursula von der Leyen, the European Commission president, quickly backed down, insisting that a mistake had been made and that any vaccine export controls would not affect the Brexit agreement, which assured that there would be no new border checks between Ireland and Northern Ireland.

Moving to use the emergency measures so soon after Britain left the bloc’s authority at the end of 2020 seemed to call into question the E.U.’s sincerity in following through with the deal regarding Ireland — one of the biggest sticking points in the Brexit agreement.

Context: The U-turn comes as the bloc struggles to make headway with its vaccination program. Already slow in ordering, delivering and approving the vaccines, the E.U. was hit with a devastating blow when AstraZeneca announced that it would slash vaccine deliveries because of production problems.

If you have 8 minutes, this is worth it

Shedding shame and silence in France

In her book “La Familia Grande,” the writer Camille Kouchner, above, accused her stepfather, the French intellectual Olivier Duhamel, of sexually abusing her twin brother when they were teenagers. The allegations have pushed France toward a painful reckoning with incest, and with the elites who excuse one another’s sins.

“If you do not speak, you leave an upside-down world,” she said. “You have to take the risk because you have a small chance of saying to those who suffer that their suffering is not for nothing.”

Uganda: The U.S. is considering action against the government of President Yoweri Museveni, a longtime ally who has crushed dissent in the East African country. The E.U. has also expressed concern.

The Shabab: Militants with the extremist group stormed a major hotel in Mogadishu, the Somali capital, on Sunday evening, raising fears of growing violence in the Horn of Africa nation.

Niger Delta region: A Dutch court ruled on Friday that a subsidiary of Royal Dutch Shell was liable for oil spills in the Niger Delta in Nigeria in 2006 and 2007, ordering the company to compensate a small group of residents in the region and to start purifying contaminated waters within weeks.

Snapshot: Above, the Tuileries in Paris last week. The pandemic has dimmed the City of Lights, our Paris bureau chief writes. But there are many reasons to soldier on through the fog.

What we’re reading: The Guardian food writer Jay Rayner’s new column, in which he revisits his most beloved cookery books. The latest, on Claudia Roden’s “Book of Jewish Food,” paints a vivid picture of Anglo-Jewish fried gefilte fish — and his mother.

Do: Would your bath be better with some fizz? Here’s how to make your own batch of scented bath bombs. (And if you need a glass of something sparkling to up the ante, consider one of our picks.)

Start the week with pizazz. At Home has our full collection of ideas on what to read, cook, watch and do while staying safe at home.

Modi vs. the farmers

Mujib Mashal, our South Asia correspondent in Delhi, India, has been covering the farmers’ protests that have shaken the country since November. The farmers are demanding that Prime Minister Narendra Modi repeal recent laws that would minimize the government’s role in agriculture and open more space for private investors. We touched base with Mujib on what lies ahead.

How much of a challenge do these protests pose to Mr. Modi and his government?

This is the largest sustained protest movement that Mr. Modi has faced since he became prime minister in 2014. There have been other waves of unrest, notably last year when people took to the streets over amendments to citizenship laws that many saw as discriminatory against Muslims, but nothing of this magnitude.

This is about an issue that affects such a large cross-section of Indian society — more than 60 percent of Indians still depend on agriculture for their livelihoods. Mr. Modi has now publicly distanced himself from the issue, rarely commenting on the protests as he tries to plot his government’s next steps.

Are there any prospects for a breakthrough?

Both sides have dug in deep, and it’s difficult to see how this will resolve anytime soon. Even if one side makes a concession, it will most likely be a dragged-out process beforehand to create face-saving.

Campsites where tens of thousands of farmers have stayed through cold and rain over the past two months have a deep sense of community. A large number of the protesters are of the Sikh faith, and feeding people through large food tents, called langars, is a matter not just of tradition but also of pride. That practice and the culture of volunteerism rooted in the faith give the movement a durability that is difficult to derail.

That’s it for this briefing. Wishing you a peaceful Monday.

Thank you
To Theodore Kim and Jahaan Singh for the break from the news. Carole Landry wrote today’s Back Story. You can reach the team at briefing@nytimes.com.

P.S.
• We’re listening to “The Daily.” Our latest episode is about the followers of the QAnon conspiracy theory.
• Here’s our Mini Crossword, and a clue: Dinner rolls? (five letters). You can find all our puzzles here.
• Matina Stevis-Gridneff, a Times correspondent in Brussels, discussed the dispute in Europe over coronavirus vaccines on the Sky News podcast “All Out Politics.”