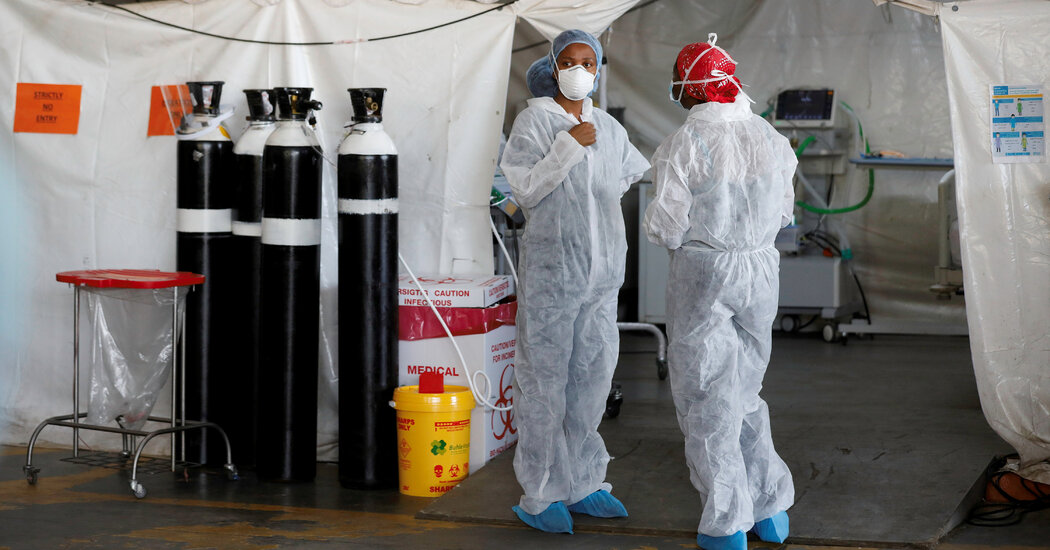 South Africa halts use of the AstraZeneca vaccine

In a devastating blow to its efforts to combat the pandemic, South Africa on Sunday halted use of the AstraZeneca-Oxford coronavirus vaccine after a clinical trial showed that it did not protect participants from mild or moderate illness caused by the variant first seen there and known as B.1.351.

People who had been infected by earlier versions of the coronavirus also did not appear to be immune to the variant, scientists in South Africa said. More than 46,000 people in the country are known to have died from the virus.

Evidence suggests that vaccines from Pfizer, Moderna, Novavax and Johnson & Johnson may also be less effective against B.1.351. Some of these companies have already begun developing a new form of their vaccines that could be used as a booster shot against the variant.

Hundreds of thousands of people took to the streets across Myanmar over the weekend, nearly a week after the military took back power in a coup.

Undaunted by memories of the army massacring pro-democracy protesters as recently as 2007, the demonstrators called for the release of Daw Aung San Suu Kyi, the civilian leader who was detained in the coup. They carried red balloons and ribbons, the color of her party.

The internet was cut off in Myanmar on Saturday, as it was during the coup, but then restored on Sunday. Fearful of more shutdowns, protesters posted live videos on Facebook in the hours that they could.

Military tactics: The junta has resorted to familiar tactics, including mass arrests, beatings by mysterious thugs and telecommunications outages. It has also used social media bans targeting Facebook, Twitter and Instagram. An entire class of people — poets, painters, reporters and rap artists among them — has gone into hiding.

Opinion: Myanmar needs a fresh path to democracy, writes the historian Thant Myint-U. A narrow focus on political change will mean only the continued military domination of this country of 54 million people.

Migrants face a perilous winter in the Balkans

About 1,300 migrants were sent back by Italy last year as they arrived at the country’s northeastern border through the so-called Balkan route. Many of them ended up stranded in Bosnia and living in dismantled migrant camps or abandoned buildings, exposed to freezing winter temperatures.

Left-wing lawmakers in Italy and migrant advocacy groups, as well as at least one Italian court, say summarily sending migrants back without any formal identification procedures or opportunity to apply for asylum violates Italian, European and international laws. Yet the number of such returns surged last year, driven in part by governments trying to contain the spread of the coronavirus.

Official policy: Migrants are supposed to be identified and listed as asylum seekers in the first European country where they arrive, but often they hope to travel beyond the southern or eastern European countries where many enter the bloc. Nonetheless, authorities are supposed to take up the migrants’ asylum request in any European nation.

On Saturday, the remains of 103 victims, members of the Yazidi ethnic minority group, were returned to the village of Kojo, Iraq, where, seven years earlier, ISIS rounded up and shot them, dumping their bodies into mass graves. The massacre became synonymous with the group’s campaign of genocide against the small religious minority.

After the plain wooden coffins were buried, above, relatives threw themselves on the grave sites, tearing at their hair, screaming in anguish and calling to their loved ones. One woman, doubled over with grief, recalled the new clothes her husband had bought just days before he was taken away and murdered. Another sobbed: “Oh my little brother, my little heart!”

Chinese economy: Since the first appearance of the coronavirus, China has mobilized its vast Communist Party apparatus to reach deep into the private sector and the broader population. Our reporters take a big-picture look at how Beijing’s successes in the pandemic — medical, diplomatic and economic — have bolstered its embrace of authoritarianism.

Trump impeachment: House managers will begin to prosecute former President Donald Trump this week on the charge of inciting the Capitol attack on Jan. 6.

Snapshot: Above, Indian border police officers mounted a rescue effort on Sunday after a Himalayan glacier crumbled, causing major flooding in the northern state of Uttarakhand. The flooding smashed two dam projects, killed at least seven people and left about 125 unaccounted for, many of them dam workers.

Cook: Celebrate something special with this rustic cake from the British-Israeli chef Yotam Ottolenghi, with its cracked layers, rough edges and white chocolate ganache.

Anticipate: Start dreaming about your first post-vaccination getaway. The planning process alone can be a potent source of pleasure.

Play: Listen to tracks by H.E.R., Nile Rodgers and Cardi B in this week’s new music roundup.

Treat yourself. At Home has our full collection of ideas on what to read, cook, watch, and do while staying safe at home.

Our ‘5 minutes’ series on classical music

Once a month, about 15 musicians, pop-culture figures and New York Times writers and editors each select the piece they would play for a friend, tied to a theme — be it an instrument, composer, genre or voice type. Here’s a look at our series called “5 Minutes That Will Make You Love _____.” (This month’s theme is string quartets.)

The series aims to make classical music as accessible to readers as a Top 40 track. You don’t need to know the difference between a cadenza and a concerto. “It’s about pure pleasure and exploration,” said Zachary Woolfe, The Times’s classical music editor.

The series has been expanded — first to individual instruments like the piano, then to genres like opera and composers like Mozart and Beethoven. Whatever the theme, it’s a five-minute interlude all but guaranteed to bring you joy.

That’s it for this briefing. Have a peaceful Monday.

P.S.
• We’re listening to “The Daily.” Our latest episode is on the $2.7 billion lawsuit against Fox News by Smartmatic, an election technology company.
• Here’s our Mini Crossword, and a clue: New Zealand has five times more of these animals than people (five letters). You can find all our puzzles here.
• Samantha Stark, who directed the new Times documentary “Framing Britney Spears,” discussed the film’s fresh perspective on the star’s life.